With the cool autumn weather and the CVD-19 Delta variant, it can be as easy to enjoy the outdoors as walking in the park. This is precisely in the Wildwood Park, an art gallery that is home to many scenic trails and gardens on the western edge of Littlewood.

Normally, 105 acres of Wildwood is best known for its arts and entertainment at the Lucy Locket Cabe Festival Theater. But the epidemic has occasionally limited these live broadcasts to open air shows. Meanwhile, 105 hectares of the park will be open daily from sunrise to sunset. In the last two hours, there has been only the scattering of other visitors, which adds to the feeling of calm.

Visitors can pick up a walkway near the parking lot at the main entrance to Wildwood. On the park’s website, it is located in front of Lake Swan, described as the “Focus of Durwood Gardens and Trails.” Fishing is allowed in the lake, catch and release policy.

Planted in the arbor, it is the garden of Zah Rock at the height of Butler Hill. Included in the slide and rock are 56 species of plants, including the Texas shrub sage, California papyrus, and native butterfly weeds.

Half a mile north of the gazebo is the end of the Ruth Allen Dogwood Trail. This road runs through a forested area and descends into a narrow valley. The eastern half of the road was created by gardener Tom Neale and Boy Scout David Curtis.

40 trails of forest, the park’s long walkway, 1.9 miles zigzag east and south of Lake Swa. At the two main entrances are kiosks with brochures about the park’s ecology. Among the builders of the road were Central Arkansas nature researchers and the Central Arkansas Trail Alliance. 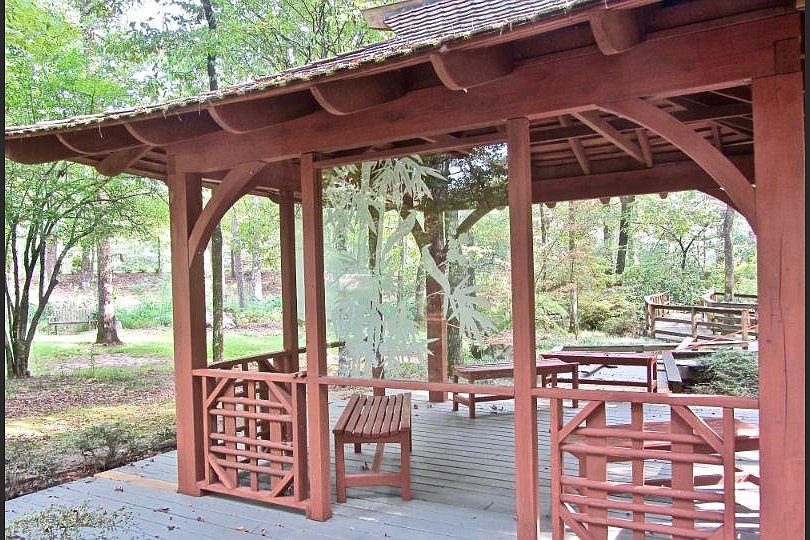 To the west of the main parking lot, two small ornamental gardens were set up near the festival theater. Booth combines native plants with sprawling pools. The plants include azaleas and lobster pine. Some of the most recognizable plants in Bruce’s garden are the bottle brush and the spring fern.

To the north of the theater, the most photographed part of the park is the Asian Woodland Garden. It was first commemorated in the 1990s by P. Alan Smith for Wildwood fan Doris Kare Gay. Ten years ago, paved roads and water paving were added. The plants are native to Japan, Korea, and China.

The Asian garden is home to Dodi Tea, a landmark on the flagpole. Its windows have glass panels with floral designs, an artistic touch that complements the natural environment. Numerous sculptures nearby, including Doug Zahn’s “Middle Kingdom,” add a strange touch to the park.

Durwood Park for the Arts