My Shelter, Ginaro Contado: 72-year-old Jamie Oliver, Italian chef, TV presenter and consultant, in the kitchen in the garden in northeast London

By Angela Wintle for the weekend magazine

Jennaro Contado, 72, shares personal belongings in the kitchen of his garden in north-east London.

These are my mushroom baskets. I have been collecting mushrooms since I was a child in Italy. Once or twice a week my mother and I would go to the hills and show them what to eat.

Then I was looking for food with my twin daughters, Chale and Olivia, whom I had left with my mother, Camila, and, recently, restaurant critic Tom Parker Bowl. She thinks porcini mushrooms are the best.

2. The hand of friendship

After watching the BBC’s food and drink program, sculptor Eduardo Paolozi gave me this ceramic statue. He admired my walking stick.

I gave him one of my sticks and he handed me my signature. He was a beloved man. We became good friends and I regularly cooked for him at the Antonio Carlucio Neil Street Restaurant where I was the chef.

There I cooked Prince Charles for his birthday, as well as Princess Diana and Pavarotti.

My partner Liz and I created this kitchen to entertain our friends in the garden by building a wood-burning stove out of bricks. When we met, when I opened a restaurant in London in 1999, I used this terracotta sharing dish made on Amalfi Beach. 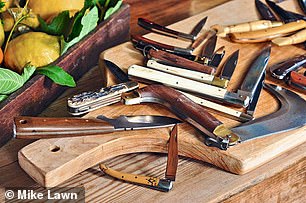 I had four sisters and was treated like the only child of a family king. This is me with my mother [far left], My aunt and younger sister at my childhood home on the beach of Amalfi Beach.

I inherited a love of food from my dad and grandmother, and even though I dropped out of school at the age of 14, I knew I wanted to be a fan because I had been helping in a restaurant for ten years.

5. Be white while working

The late Antonio Carlucio and I were desperate to lighten the cane. When I borrowed the knives, he would say, ‘Take one, but take two, so when I die I will leave it all to you.’

These are just a few of his collections. Antonio was like a family, we worked together for 35 years, in the restaurant and for the BBC food and drink and two greedy Italians. I miss him so much.

Jamie Oliver gave me this beautiful bag for my son’s birthday. It is made for Umbrian truck drivers and a well-known leather manufacturer. Jamie [inset, with Gennaro] Antonio and I were just 17 when he came to work.

He was so loving and hardworking that we beat him. I think of him as a child and he calls me his father in London.